A number of followers of this little blog have asked us for more photographs of Dom Michael’s profession in January, and for some explanations of the ceremonies. 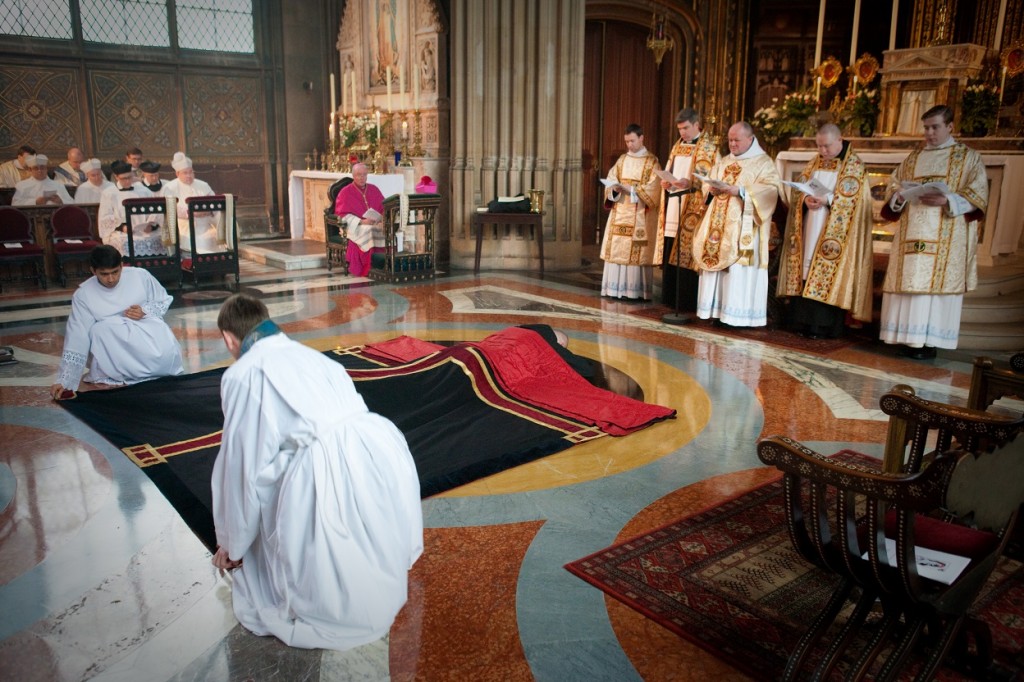 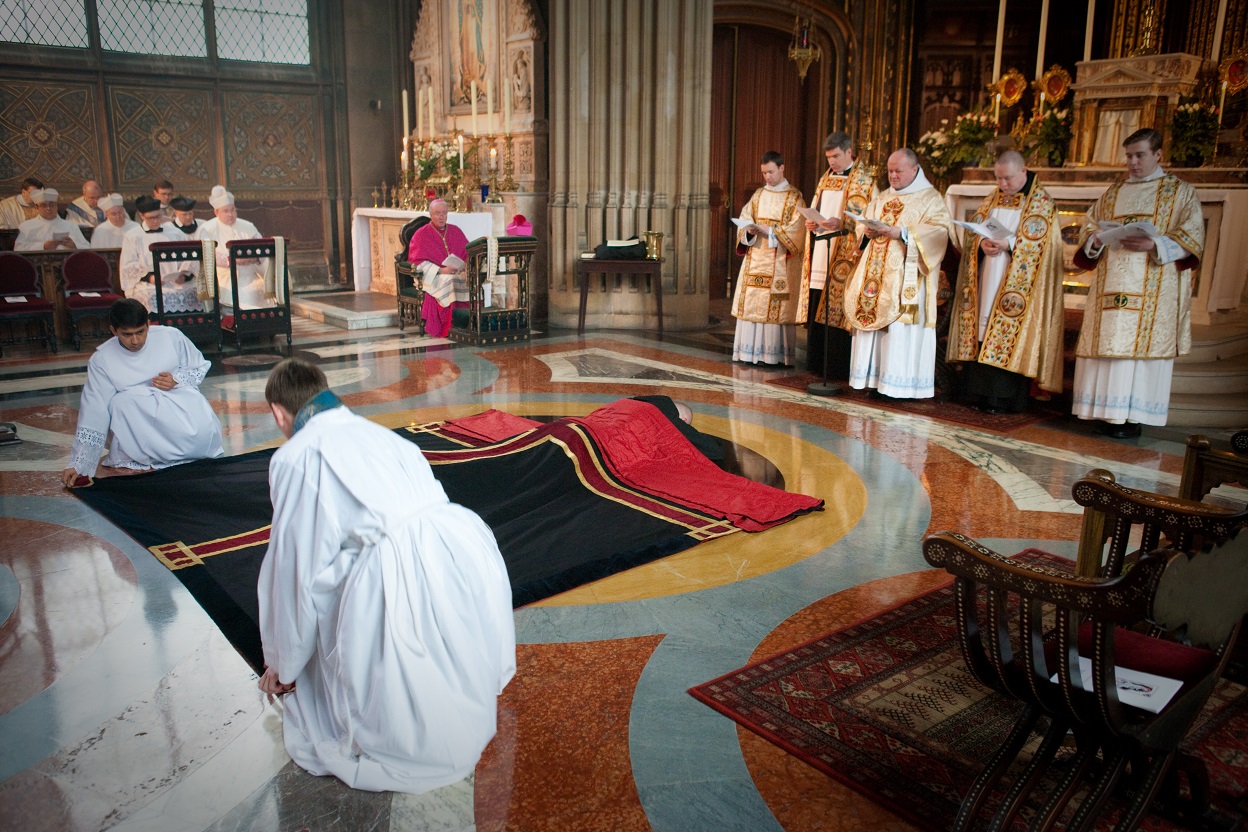 For most of you, the most striking aspect was the use of the funeral pall during the litany of the saints. This use was recently reintroduced into our monastic ritual after an absence of thirty or forty years. It is a powerful depiction of the monk’s resolve to die to the world and rise to a new life in Christ. To be ‘buried’ in the way that St Paul speaks of baptism, since monastic profession has long been closely identified with Christian baptism.

Having been questioned about his intentions and resolve to persevere in the obligations of his vows, Brother Michael read his profession chart.

It read as follows:

In the Name of our Lord Jesus Christ Amen.

I, Dom Michael Tomas Vician, of Jalsovik in the Diocese of Banska Bystrica, promise for life stability, conversion of life and obedience, according to the Rule of Our holy father Benedict in this monastery of Saint Michael at Farnborough, in the Subiaco Congregation, before God and the saints whose relics are preserved here, in the presence of the  Right Reverend Dom Cuthbert Brogan, abbot of this monastery, and the monks of this community. In witness whereof I have written this document with my own hand, on the 5th day of January in the year of our Lord two thousand and thirteen.

Having read this, he showed it to the abbot and monks and to the clergy and people present, and then signed it on the altar. At our simple professions it is signed on the credence table, but at solemn vows it is signed on the altar and, once the abbot has countersigned it, is placed under the corporal, and the Mass is celebrated on it, as a powerful symbol of the monk’s sacrifice being united to the cross of Christ.

The monk then sings the ‘Suscipe’. This is the ancient song of monastic self-offering. Just as on Good Friday and Holy Saturday we sing the Ecce Lignum or Lumen Christi three times on ascending note, so we do with the suscipe. The chant translates, ‘Uphold me Lord according to your promise and I shall live. Let not my trust in you be disappointed.’ The first half he sings with his arms outstretched. The second half he sings humbly kneeling with his arms crossed over his breast. For all these rites, Brother Michael’s friend, Father Christian Leisy of the Abbey of Christ in the Desert, New Mexico, acted as his ‘godfather’ and accompanied him.

The newly-professed was then clothed in the full monastic habit – the cowl. This garment of long sleeves shows that the monk is reclothed in Christ, he has ‘put on the new man’ as St Paul puts it.

Finally comes the presentation of the signs of profession. The Antiphonale Monasticum, newly-bound in calf by the abbot, was presented as a sign of Brother Michael’s obligation to ‘put nothing before the work of God’ – the divine office. All then give the new monk the kiss of peace.

The Mass then proceeded as usual.

Fr Tibor, of the London Slovak Mission, was particularly pleased by our efforts to produce a Slovak translation of the ceremonies for Brother Michael’s family and friends.

And Brother Michael’s parents and his ‘little’ brother David were very proud of him. David was in his village’s particular version of national costume for the day.

Adriana and Jozef, Brother Michael’s parents were beaming with pride, and with thanks to God for the wonderful vocation to which their son has been called.

Amongst Brother Michael’s friend were young Milan and Veronika, who were married last year.

They were not the only Slavs present on the day.

After the Mass there was a great celebration lunch. The abbot lifted the monastic enclosure, so many of our friends had their first view of the interior of the monastery. Our monastery was built for a very small community. We moved the tables of the refectory to allow for a large number of guests.

Bishop Egan, Prior Hugh O.Praem., Provost Ignatius Cong. Orat. and Brother Michael’s parish priest and family, enjoyed a little more elbow room in business class – our monastic calefactory was transformed for the day. On the window ledge, the Infant of Prague showed his solidarity with the Monastic Order by wearing his cowl.

Visit of the French Ambassador
Pugin and Ramsgate