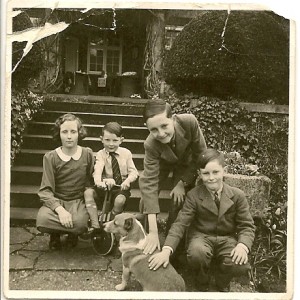 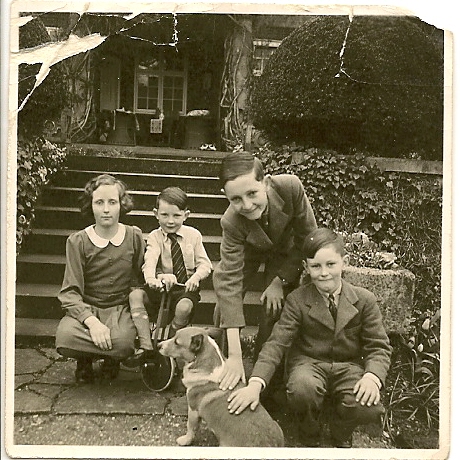 Fr Abbot shared some thoughts on Fr Magnus, whose funeral took place yesterday in the Abbey Church. Our little community was delighted to be supported by brethren from Prinknash and Pluscarden, as well as Chilworth, Douai and Ealing abbeys, and diocesan clergy friends.

Magnus es, domine, et laudabilis valde: These words begin the confessions of St Augustine. You are great O Lord and worthy to be praised. ‘Magnus’ means great, a great man. ‘Man’ – the confessions continue – ‘is but a particle of God’s creation. God rouses us to delight in His praise; for God has raised us for himself and our hearts to not rest till they rest in Him.’

From the outside our Fr Magnus always seemed to be a very restless man – he could not keep still. He blamed this on events in his childhood. If chatting in the kitchen he would wipe the surfaces as he spoke. When the monks looked after the parish for a while, parishioners were so taken aback at his energy that he quickly picked up a series 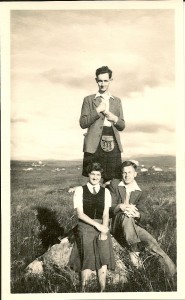 of nicknames – the Flying Scotsman, Perpetual Motion, the Elgin Marvel! In the liturgy he could not keep still – there was always a twitch or a sudden look around. A visitor saw him twitching during Mass and said ‘that man has not long for this world’ -this was in 1965. A visiting deacon remarked that assisting Fr Magnus at the altar was like deaconing an unexploded bomb. In the refectory in the 1980’s we would have recorded music during lunch on Sundays. If Fr Magnus was the server that week you were in for a treat. Swan Lake would have him gliding down the lino, to the 1812 Overture he would crash down the stainless steel dishes with the cannon fire.

The interior was quite different. Solid as a rock. If your first principles were right – then everything else would fall into place. Fr Magnus was a lawyer. He had studied law at Oxford, before his conversion to Catholicism and transfer to theology. He helped write our Constitutions to bring them up to date wiht the new Code of Canon Law.  His Prinknash nickname was ‘Fr Crash Barriers’ -– the gospel is the road, he said, and you should be fine with the gospel – but leave the road and you need the crash barriers. When our community hit some canonical bumps on its road, Fr 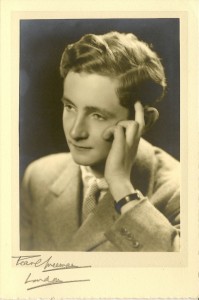 Magnus never doubted that we were right and things would end well, and he was right and things did end well. There were other certainties – the double entry system never let him down. He was particularly happy when –during the restoration work on the Abbey Church in 2000 –he proved the mighty computers of English Heritage to be wrong in their calculations. The computer was out by 18 pence – Fr Magnus’ double entry books were right.

He was quite tight-fisted as a bursar.  I could never get out of him how much money we did or didn’t have. If I asked how much we had in the bank he would answer ‘we can’t touch our reserves.’ When I told him the Provincial Chapter had raised the amount an abbot could spend he replied ‘that’s very nice for those who have that sort of money.’!  In the mid 1990s you would find a calendar on the wall from the 1960’s. If the first of January is a Monday and this is a leap year – then you don’t need to waste money on a new calendar! So his office continued in a 60′s time -warp with the old calendar and its pictures of Scotland. When a delegation of monks approached him about the need for a new kitchen, he suggested a new strip of Formica on the table would brighten the place up. 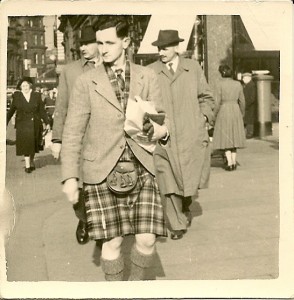 He was a creature of rituals. The bath at 12 minutes past four on a Wednesday. The daily faithful slamming shut of the windows which Fr Wulstan had faithfully opened earlier. Then there was the infuriating endless winding of clocks with his scapular over one shoulder – it used to drive me nuts – and now I find myself doing exactly the same thing.Go to him with a problem and you couldn’t wish for better. Even though he was very trying to live with, he was the most supportive and gentle community member one could hope to find.

The kitchen door bell would ring in my early days and people giving strange names would come to see him, ‘Ginger’ for example. They were members of an Alcoholics Anonymous group, who would come to chat with him. The 12 steps of AA was another of Father Magnus’ systems. He knew their programme so well that many presumed him to be a recovering alcoholic himself. His novices, from his novice master days knew his kindness. Many of his ex-novices who found that the monastic life was nottheir vocation, nonetheless, continued to drink from his wisdom and found it helped them in their marriages and secular lives. Magnus was a true gentleman – his courtesy and deferential welcome was afforded to all in like measure. 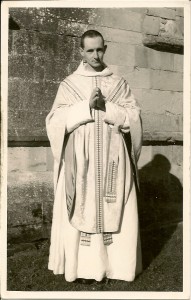 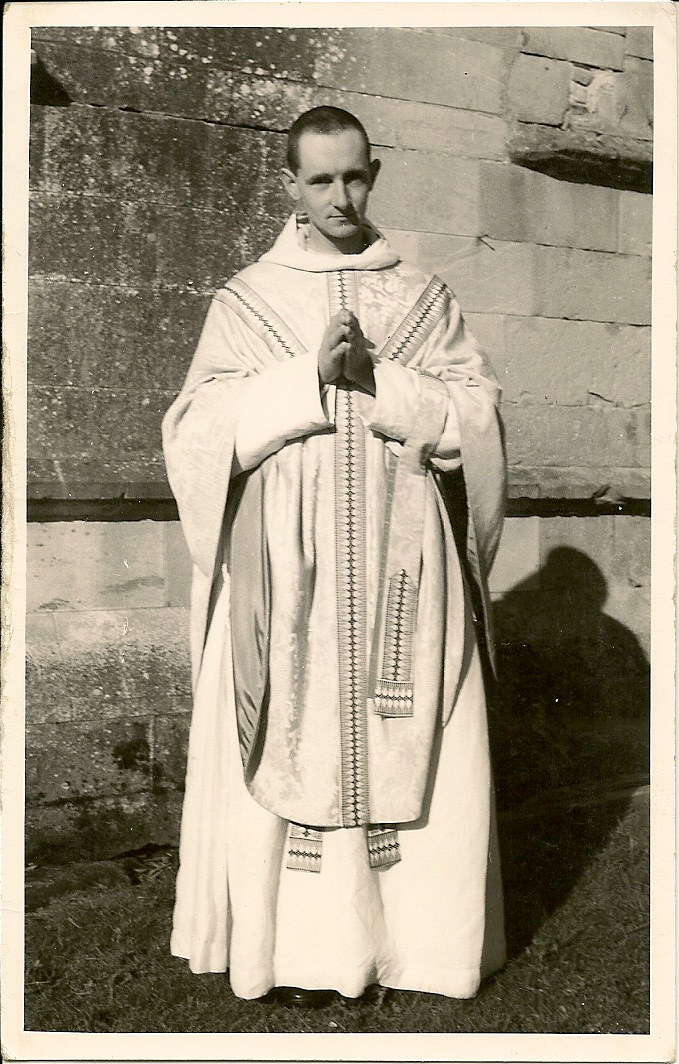 As a monk he was one of the great figures of the province and our Congregation. He had been the first postulant of Pluscarden, the Novice Master of Prinknash , Prior of Farnborough, member of the Provincial Chapter from time immemorial, member of the Juridical Commission of the Subiaco Congregation. It was unthinkable for anything to happen without his being involved in it somehow. As a monk he was utterly reliable. Always at the Divine Office. He had a Padre-Pio sort of quality of always being back in choir when we all thought he was out at a meeting or some other duty.His singing was awful – he would listen very attentively to the pitch pipe at the start of the office and then sing a completely different note. He preferred the 6th Gregorian mode – ‘three blind mice – in the sixth mode – no dreadful semitones.’

He was armed with the psalter when his health began to suffer. His stroke occurred in choir – during vigils on the Solemnity of St John the Baptist. We were told he would not wake up, but he did – while I waHe delighted in the poem of George Mackay Brown which said that his patron ‘St Magnus the Martyr Earl of Orkney had been ‘armed with the psalter.’

Il faut toujours dire, Dieu soit béni, – you should always say blessed be God– a saying of St Jeanne Jugan the foundress of the Little Sisters. This, Fr Magnus explained was the same as our Benedictine Ut in omnibus glorificetur Deus that in all things God might be glorified.s trying to access our bank accounts. His last four years with the Little Sisters of the Poor saw him abandon his bed, then his wheelchair then his Zimmer , then his stick. When I lunched with him a few weeks ago he was mooting being the main celebrant at Mass again. He lived to speak with the Holy Father during his visit to England.

Magnus es, domine, et laudabilis valde: you are great O Lord and worthy of Praise. Today, O Lord, we return to you our beloved Magnus – a great man – a poor creature in whom you awoke the delight of your praise, whose soul ,we pray, will find its rest, now that it truly rests in you. Amen. 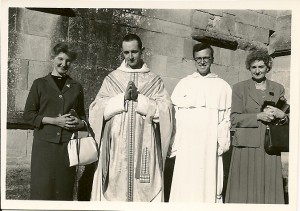 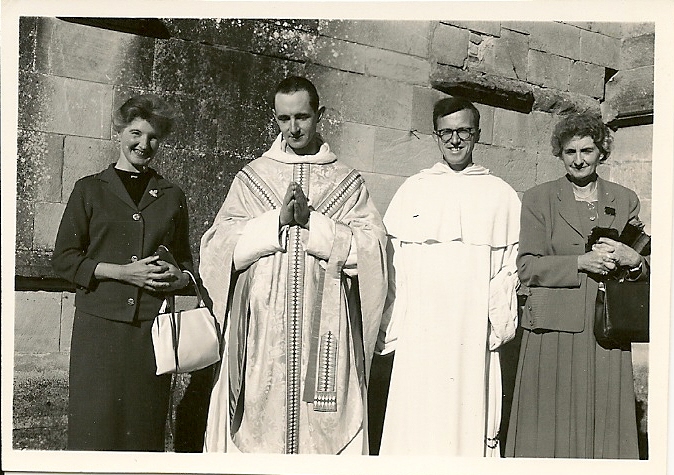