Dom Michael Vician (aged 28) made his Solemn Profession on January 5th after five years in the monastery. In a ceremony lasting more than two hours, Brother Michael lay prostrate on the sanctuary floor, covered with the funeral pall whilst the Litany of the Saints was chanted, a sign of his death to the world. He then sang the three-fold Suscipe me Domine chant (uphold me, Lord, according to your promise, and I shall live…), read his chart of profession, was clothed, i

n accordance with ancient custom, in the Benedictine cowl and presented with the Antiphonale Monasticum as a sign that he should ‘put nothing before the Work of God’. 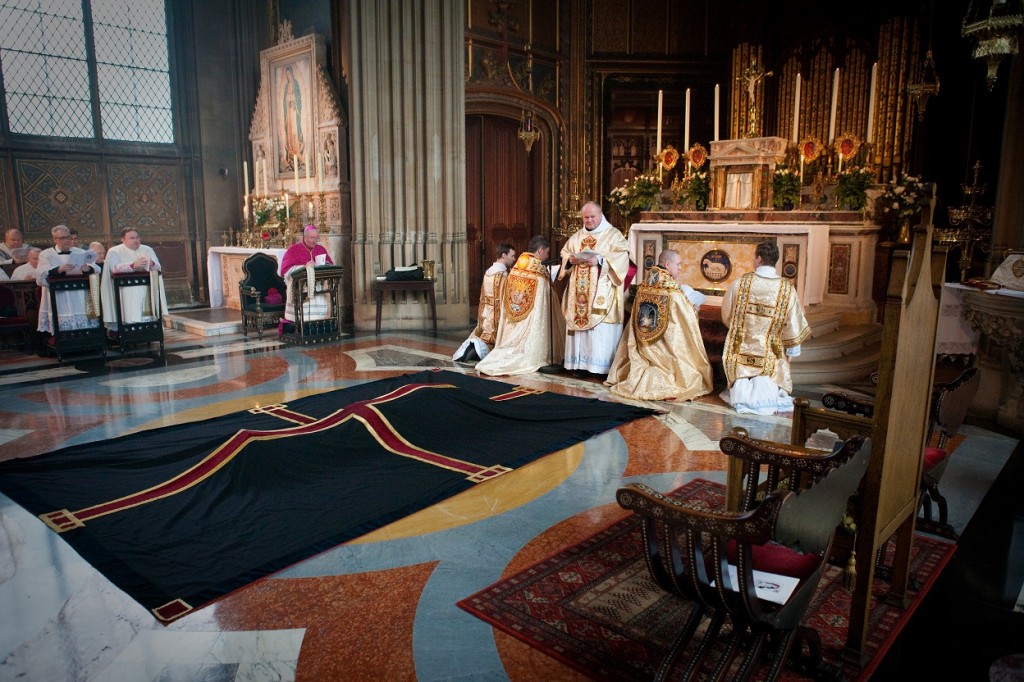 The monastic community welcomed many friends for the occasion. Among them were the Premonstratensian Canons of Chelmsford, Oratorians, Carmelites, Dominicans, Blessed Sacrament Fathers, and Benedictines of other monasteries, including nuns of Tyburn where Fr Abbot has served as confessor for many years, and the Novice Master of Douai Abbey.

Bishop Philip Egan,  the recently consecrated bishop of the Portsmouth Diocese in which the Abbey is located attended as a guest of the monks and spoke at the end of the Mass:

‘In today’s culture,  organised  religion and in particular Christianity, is often side-lined or relegated to the private domain.  Even some of those who do profess a religion, tend to treat their faith in the manner of an ‘added-extra’, a  hobby,  something extrinsic  to the rest of  their  living. Yet  as we saw symbolised  so  powerfully in Bro. Michael’s prostration on the floor of the sanctuary,  covered with the funeral pall, not only for him but  for anyone whom Jesus has called to be his disciple, faith can never be an added-extra. Our love for God, our discipleship of Christ, our Catholic Faith is never just a hobby. It  has to be  the most important thing in life.  My faith is the most important thing in my life.  My love for Jesus Christ has to be the most important thing in my life.  –Because  Jesus Christ and His Gospel is the only way to true, genuine, lasting human happiness and fulfilment. Indeed, as St. Augustine taught, the human heart is restless until it rests in God.  This is why being a disciple of Christ, being a friend of Jesus, being in love with God and giving myself entirely to him, is the most exciting adventure a human being can ever undertake.

Today, we rejoice in the Solemn Profession and Monastic Consecration of Brother  Michael Vician. It’s a wonderful day, a day  of  great joy and happiness, a day never to be forgotten for Bro. Tomas Michael, for his family and for this dear community of  Farnborough Abbey, dedicated to St.Michael the Archangel. I thank Abbot Cuthbert for the

invitation to be here today as the Bishop of the Diocese in which this Abbey stands.  And so on behalf of all the priests and people of the Diocese of Portsmouth, I invoke the prayers of our  own patron saints and marty

rs, above all Mary Immaculate and St. Edmund of Abingdon. May the  Lord bless you abundantly. We wish you, Bro. Michael, every happiness in your vocation and we promise to pray for you that every day you will be faithful to your vows and grow deeper and deeper in love with the Sacred Heart of Jesus.’

A much larger selection of photographs of the day will appear on the blog shortly.

The Wantage Conversions
Visit of the French Ambassador